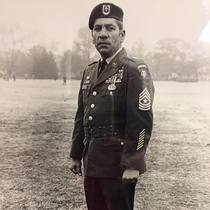 Sonny proudly served in the 82nd Airborne for most of his 35 year career.  During this time he was awarded the, Silver Star, Bronze Star, three Purple Heart, Master Parachutist Badge and many other commendations.

After completing an orderly withdrawal from a battle torn hill near Kontum, Sergeant Alvarez noticed that four men from the company were missing. Disregarding a pending airstrike, Sgt Alvarez and four volunteers scaled the hill in search of the four men.

The missing soldiers, only one of which was alive, were shortly discovered. Sgt Alvarez had the seriously wounded man and his equipment evacuated back down the hill, but remained behind to cover the withdrawing rescue party.

With the air strike growing closer by the minute, Sgt Alvarez was wounded by a grenade tossed by an enemy sniper. After shooting the sniper he moved down the hill to his small party, reaching the safety of the company seconds before the air strike destroyed the hill.

The citation accompanying his award stated that, “Had it not been for Sgt Alvarez’s quick organization of a search party, his calm action under hostile fire and his disregard for his own welfare, the wounded man would have surely lost his life and several weapons and valuable equipment would have been lost to the enemy.”

The family will receive friends from 9:30am to 10:30am on Monday, March 6, 2017, at College Lakes Baptist Church.  A funeral service officiated by Rev. Sam Lanier, will follow at 10:30am, with a burial at Sandhills State Veterans Cemetery with the rendering of full military honors.

In lieu of flowers please make a contribution to College Lakes Baptist Church, 4704 Ramsey Street, Fayetteville, NC  28311, or to a charity of your choice.