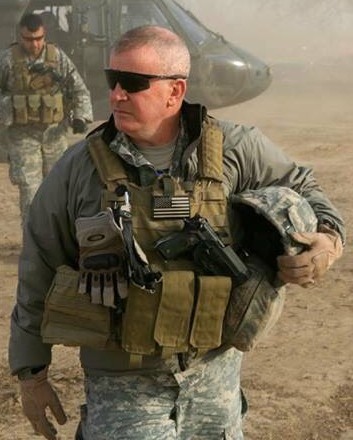 Sean was a graduate of Morris Catholic High School in Denville, New Jersey where he was an All-State Wrestler, Football player and Captain of both teams.    He went to The Catholic University of America where he graduated with a B.S. in Biology. Sean was Captain of Catholic University Football team as a Free Safety and formidable Rugby Player while at Catholic University.   He worked full time at night to pay for his school as a bartender on Capitol Hill while going to school full time and playing sports.  This work ethic would serve Sean well when he enlisted for attendance in the US Army Officer’s Candidate School with the goal of becoming a Physician.

In 1985 Sean was commissioned as an infantry officer.  When his feet hit the ground on Fryar drop zone in Ft. Benning Georgia after his first jump his calling became clear.  He would not go to medical school but would make the Army Special Forces and Special Operations his path forward.

Sean was extraordinary.  His illustrious career spans 30 years and 20 assignments began in 10th Mountain and then 3rd Ranger Battalion.  Sean became Special Forces qualified and was Detachment Commander of 7th Special Forces Group in Fort Bragg, North Carolina. He then served in Latin America working on covert and counter terrorism operations with the famous “Lancero’ Special Forces of Colombia.  Sean would be one of only a handful U.S.  Special Forces Soldiers who would earn that tab along with the U.S. Special Forces honor.    He earned the respect of his “Lancero” commanding officers and teams by executing flawlessly on his operations and built long standing relationships within the Southern Command that would last his lifetime.

Sean returned to 7th Special Forces Group as Company Commander based in Fort Bragg, North Carolina.  He then went to Bosnia where he was CJSOTF Commander for USSOCOM Command. Upon his return he was promoted to Battalion Commander of 2nd Battalion Advanced Skills Commanding officer at the JFK Special Warfare Center and School.  Sean earned his first Masters Degree in National Security and Strategic Studies from the Naval War College in Newport, Rhode Island.  Upon his graduation, Sean was assigned to Ft. Belvoir as Squadron Commander of a Special Operations team for USSOCOM.   Sean then earned a fellowship in McClean, Virginia with the CIA.

Sean was then stationed back in Bogota, Colombia as the SOCFWD Commander for Southern Command.   He became Commander of 7th Special Forces Group and deployed as the commander of the Combined Joint Special Operations Task Force-Afghanistan.  He then served as Executive Officer to the Commander of USSOCOM at MacDill AFB in Florida.  Sean attended the Army War College in Carlisle, Pa and earned his second Masters Degree.

He was promoted to Brigadier General and was Deputy Commanding General of Regional Command North based in Mazar e Sharif Afghanistan.  He returned to USSOCOM Command as the Deputy J3 Operations Commander until he took Command of SOCSOUTH based in Homestead, Florida.  His final command was SOCSOUTH –the SOF organization for Latin America that oversaw Special Operations teams to South and Central America as well as the Caribbean.

Sean retired from the US Army in 2015 as a Brigadier General and continued to serve his country as a Strategic Advisor for many agencies around the globe.  He was very active in non-profit organizations like Special Operations Warrior Foundation and Chief Operating Officer of Southern CC Inc.  Sean was a fiercely competitive golfer throughout his life and thoroughly enjoyed playing as often as he could.  During his time in the service he ran the SOFAM Golf Tournament for his Special Forces and Special Operation Families so that when his teams deployed his families would have monetary support to assist them.    He cared deeply for the men and women who worked for him and it showed in his actions every day of his life.  Sean had an economy with words but when he did speak it was usually to the point and profound.   He loved to laugh and was incredibly funny and quick witted.  He was not a politician although he fully understood the importance of the exercise. A man of deep compassion, humility, generosity and caring to those that were fortunate enough to know and love him.

He was well known for helping wounded warriors find meaning after injury and would take them into his unit to help them recover so they could continue to serve.  He once had a commanding officer tell him that he cared too much about his men and because of that would not make General.  He promptly replied  “that would be fine with me”.     He was a consummate leader who exemplified the Oath of Special Forces and Special Operations as the elite silent professional.   A warrior whose character, courage, integrity, loyalty and honor was unshakable and indomitable.

Sean served his country with the utmost of character, courage, integrity and honor.  He loved his family who made great sacrifices at home.  There are no words to truly express how we grieve the loss of Sean. He was our hero, our standard, our compass.   We must focus on the fact that he was ours albeit for too short a time on this earth.  While he was here he gave us his best every day and for that we are eternally grateful to God.

Abraham Lincoln said  “and in the end it’s not the years in your life that count; it’s the life in your years”. These words sum up the life Sean has lived.  God will say “well done good and faithful servant” for being a warrior for good against evil. Sean is home again in his beloved Valhalla.

A Christian Mass will be celebrated at the Special Forces Chapel Ft. Bragg, North Carolina on September 8 at 10:00a.m.  Visitation will be on September 7th at Sullivan Highlands Funeral Home 610 Ramsey Street Fayetteville, North Carolina from 5-8 p.m.  Interment will be at Arlington National Cemetery with Full Honors on Friday, March 1, 2018 at 11:00 a.m.

In Lieu of flowers the Mulholland Family asks that donations be sent to one of these two charities that Sean was dedicated to: