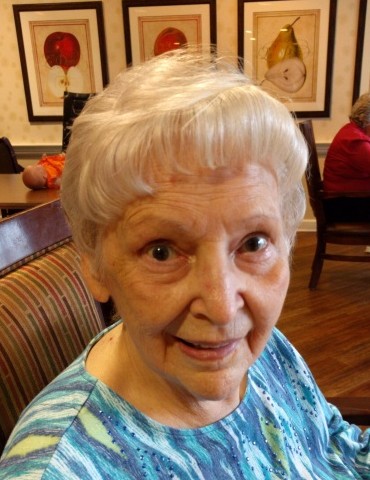 Stella Marie Blondin (nee Galvin) 81, of Vinita, OK and Fayetteville, NC, passed away on June 26, 2017 in Springfield, VA.
Stella was born in Vinita, OK to Raymond Anthony (Sr.) and Lucy Mae Galvin (nee Bigknife) on July 24, 1935. She was the fourth child of twelve who went on from high school to earn a Registered Nursing Certificate. She met and married Raymond Louis Blond in, a US Army soldier. She and Ray raised three beautiful daughters, whom they loved very much. The family moved to Fayetteville, NC in 1972 and lived there 42 years. She was a private and independent person, and a devout Catholic. She loved her neighbors and friends, who helped her in her later years. She loved walking, watching UNC basketball, swimming, and bird watching for cardinals. She moved to Springfield in 2015 to live with her daughter, Debra, and son-in-law, Chris. She enjoyed seeing her local grandchildren and great-randdaughter, Adalyn.
Stella is survived by her daughters Debra Wagner of Springfield VA, Dominique Blondin of Los Angeles, Diana Blondin Holman of Parkersburg, WV, as well as sisters Edwina, Judy, Josie, and Lucy, grandchildren Mark, Michael, Bridgette, Christina, Larry, and great grandchildren Austin, Krista, Shawn, and Adalyn. She is preceded in death by her husband Raymond, and siblings Raymond, Samuel, Loretta, Mary, Lucy, Julia, Paul, and Stephen.
In lieu of flowers, memorial donations may be made to Catholic Charities, Salesian Missions, USO, and/or the Alzheimer’s Association (alz.org). The family wishes to extend their gratitude to her caring neighbors as well as family members and friends who kept in contact with her or prayed for her over the years.
The family will receive friends on Thursday, July 6, 2017 from 6:00 p.m. until 8:00 p.m. at Sullivan's Highland Funeral Service. Funeral services will be held at 10:00 a.m. on Friday, July 7, 2017 at St. Michael the Archangel Maronite Catholic Church. Burial will follow in Sandhills State Veterans Cemetery.
Online condolences may be expressed at sullivanshighland.com.
Services are entrusted to Sullivan’s Highland Funeral Service & Crematory, of Fayetteville, NC.

To order memorial trees or send flowers to the family in memory of Stella Marie Blondin, please visit our flower store.
Send a Sympathy Card