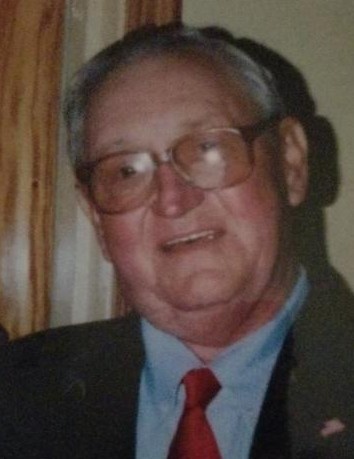 Richard McKinney, Sr., of Fayetteville, NC, joined the Lord and his beloved wife, Martha, on February 12, 2018. Richard was born in Bakersville, NC, March 21, 1935, to Jefferson and Fairy McKinney. He journeyed out of the mountains in 1954 to Fayetteville in response to a newspaper ad for a theatre manager. He and Hurricane Hazel hit town on the same day. Richard not only survived the hurricane and got the job, he met the love of his life, Martha Ellen Lee of Fayetteville. They enjoyed 51 years of life together until her passing in 2008.  To the local community, Richard was a legend, operating the Fox Drive-In on Bragg Boulevard for 32 years. The drive-in was one of the largest in the state of North Carolina and the most popular showplace in the surrounding area until closing in 1990. From bingo nights to all-night, tuxedo-clad GI champagne fetes, the Fox Drive-In was the place to go for making memories. After the drive-in closed, Richard started the Neu-Made Company, an air conditioning and refrigeration service business that kept many of the local business owners up and running. The oldest of four, Richard had two brothers, Phil McKinney who preceded him to heaven (of Greenville, SC, married to Vivien McKinney), Robert (Bob) McKinney (of Glade Valley, NC, with wife Jill McKinney), and Ann Forbes (of Bakersville, NC). Richard and Martha had three children, Ginny Booton, who resides in Austin, Texas with her husband Steve; Richard McKinney, Jr., married to Lori Cashwell McKinney and lives in Charlotte, NC; and Susan McKinney, of Fayetteville. Richard had two grandchildren, Kristen Clark (of Winston-Salem, NC along with husband Josh Clark) and Philip McKinney (of Mansfield, Texas along with fiancé Paige Wallace). Richard never met a stranger and made life-long friends who all have lasting memories of their adventures together. He loved his family, the Green Bay Packers, John Wayne, his many, many friends, and his dogs, not necessarily in any particular order. Life was rich with love, family and friends around the McKinney home over the years. A service to celebrate Richard’s well-lived life is planned at 11:00 a.m. Friday, February 16, 2018, at Gethsemane Church, 4300 Blanton Road, Fayetteville, NC. Visitation is offered at Sullivan’s Funeral Home, Thursday, February 15, 2018, from 5:00 pm – 7:00 pm for the friends and family of Richard McKinney. In lieu of flowers, please consider a donation to the Hospice Promise Foundation (Cape Fear Valley Hospice – Attn: Bonnie, 3400 Walsh Parkway, Suite 100, Fayetteville, NC 28311) or Gethsemane Church (4300 Blanton Rd, Fayetteville, NC 28303).  The family is grateful for the outpouring of love and support and especially wants to recognize Valerie Rodriguez and Yhetta Fitzgerald of Cape Fear Valley Hospice, Catherine Kelly, MD, Ray and Martha Parks, George Roberts, Tim Baxter, Anna Karteris, and Dr. Shanessa Fenner, who have been pillars of strength and Briny Castruita-Perez for her loving care of Richard.

To order memorial trees or send flowers to the family in memory of Richard Lee McKinney, Sr., please visit our flower store.