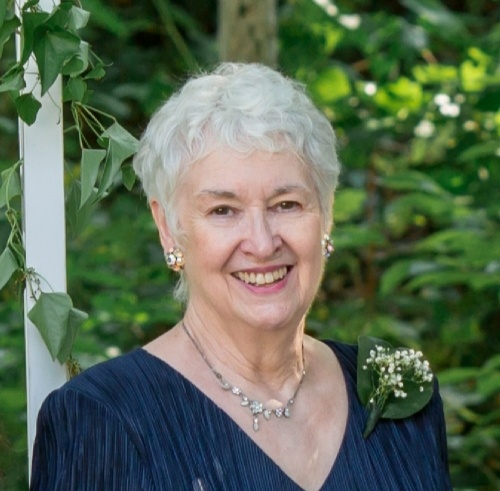 Peggy “June” Lancaster, 81, of Fayetteville, NC went home to join her Lord and Savior after a valiant, nearly year-long battle with pancreatic cancer. She was surrounded by family in her home at her passing on October 14, 2019.

June was born in 1938 at Queen Charlotte’s Hospital in London, England to the late Arthur S. Chubb and Florence (Watts) Chubb. She lived a full life caring for others as a wonderful mother, friend, writer, and child advocate. As a child living in London during WWII, she was tasked with ushering younger children to safety in shelters during the bombing raids. As a young teenager, she volunteered in the St. John Ambulance Brigade in Wembley. In 1956, she married an American Airman and moved to the US. She eventually settled into Fayetteville and joined Holy Trinity Episcopal Church.

June cherished her church, the people there and the church’s mission. Shortly after joining, she became the director of the Holy Trinity EYC, was a Sunday School Coordinator and served as a decades-long member of the Altar Guild. She was also on the Church Vestry, Rector Search Committee and, as Church Historian, recently culminated her service to the church by completing and publishing the official history of Holy Trinity Episcopal Church.

She loved England and all things British that reminded her of home. In particular, she loved hedgehogs, bluebells, lavender, and tea. She enjoyed entertaining family and friends in her home, cooking British treats with her granddaughters, and watching tennis matches (especially Rafael Nadal). She was a proud member of the local British Club and the House of Raleigh Chapter of the Daughters of the British Empire.

While June enjoyed her church, bridge clubs and British clubs, she also loved her book clubs. June loved books and reading. Her favorite author was her fellow countryman, Neville Shute. She was an active member of the local Friends of the Public Library for many years and was instrumental in the development and placement of the current Main Library on Maiden Lane.

In her mid 40’s, June returned to college to finish her degree and graduated in 1987, Summa Cum Laude from Fayetteville State University, with a bachelor’s degree in English language and literature with a concentration in history. After graduation, June enjoyed stints as the sole reporter and photographer at the Raeford News Journal and Editor of the Spring Lake News. June became a naturalized US citizen in 1993 and joined the Cumberland County Schools as a speech writer and Grants Director. She worked with teachers and administrators to secure grant funds to enhance the education of local students to include the creation of the Academy of Natural Science at Cape Fear High School. June was the writer and first host of the Cumberland County Schools public information television program before transitioning to the Director of Development at Fayetteville Technical Community College. June continued as a speech writer for local and state leaders and, after earning a Certificate in Nonprofit Management through Duke University, she taught others to write grants.

As a participant in the Women’s Health Initiative since the late 1990’s, June contributed to improved health care and the development of medical advances that benefited women all over the world.

Throughout her life, June never stopped caring for children. She knitted outfits for baby dolls to be distributed by the Salvation Army at Christmas, was a judge for the Fayetteville Observer’s annual Christmas story contest and served on the board of the Child Advocacy Center.

Most of all, she loved her family and instilled in her sons strong values that have served them well. She will be dearly missed and will remain forever in our hearts. June is predeceased by her siblings Rosemary and Arthur. She is survived by her sisters, Violet and Margaret, four sons, Jeffrey Butscher of Manhattan Beach, CA, Rev. John Lancaster and his wife Maria of Fayetteville, NC, Tim Lancaster and his wife Amy of Fayetteville, NC, and Colin and his wife Mandi of Charlotte, NC. She is the extremely proud grandmother of 12 grandchildren, John III, Victoria, Brigitte, Caitlin, Christiana, Taylor, Anton, Nicholas, Cobi, Zachary, Brielle, and Olivia, and doting great-grandmother to Brigitte’s son, Dallava.

June and her family will forever be grateful to her caring neighbors Ginger and Larry who were available day and night to tirelessly provide her comfort and care. The family wishes to thank the staff of Home Instead Senior Care, her special friend and advocate Linda Bennett, and her dedicated caregivers Stephanie, Amalia, Ciara, and Marla. Special thanks to her many close friends including her best friend Margaret Tate, and our Holy Trinity family who rallied to our aid.

A celebration of June’s life will be held at Holy Trinity Episcopal Church, 1601 Raeford Road, Fayetteville, NC on Saturday, October 26, 2019 beginning at 1 p.m. with visitation to follow in the church’s parish hall.

In lieu of flowers, memorial gifts can be made to Holy Trinity Episcopal Church or the charity of your choice.

To order memorial trees or send flowers to the family in memory of Peggy "June" Lancaster, please visit our flower store.