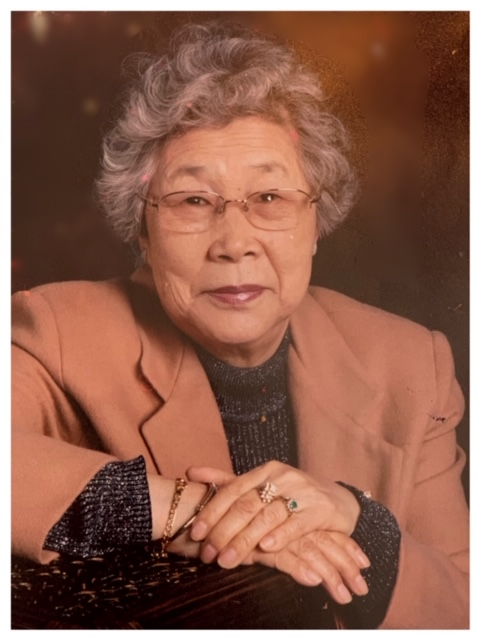 On May 26, 2020, we lost our dearest, sweetest mom, Mrs. Myung-Deuk Theresa Kim. Mrs. Kim was born on January 1, 1928 in Seoul, Korea.  Mrs. Myung Deuk Kim was a good woman who is remembered lovingly by her family.  She was the first-born of her parents, Mr. Eok-Man Ham and Mrs. Beom-Yong Lee and had two younger brothers, Yong-Deuk (deceased) and Yong-Soon.  Her father, Mr. Ham, was the owner of a general store and raised Mrs. Kim in the Itaewon District of Seoul where she spent her childhood. Mrs. Kim, was brought up as the only daughter under her parents’ love and devotion, being eight years older than her younger brother.  Being born one-half of twins, Mrs. Kim survived losing her sister within three days of their birth. Mrs. Kim’s father named her Myung (life) Deuk (earned) as he was afraid of losing her.

After completing high school education, Mrs. Kim moved on to a higher learning institution to become a school teacher, however, she had to give up her dream when her father abruptly passed away.  As the oldest of her siblings, she joined the workforce, getting a job as an administration specialist at the Central Capital Hall in Seoul under the Japanese occupation.  She met her life-long mate, the late Mr. Chang-Han Kim, and married him in 1949.

Mrs. Kim and her late husband were married for more than 70 years living through the Korean War raising one son and four daughters. They took a giant step of immigrating to U.S. in 1981 with the remaining family joining them by 1982. Mrs. Kim became a wonderful homemaker, helping raise her grandchildren. She was also a devout Catholic and was pillar in her church community. Later in life, Mrs. Kim enjoyed planting, flowers, and coloring books.

The family will welcome friends from 2 to 4pm on Saturday, May 30, 2020, at Sullivan’s Highland Funeral Service.

To order memorial trees or send flowers to the family in memory of Myung Deuk Kim, please visit our flower store.
Send a Sympathy Card