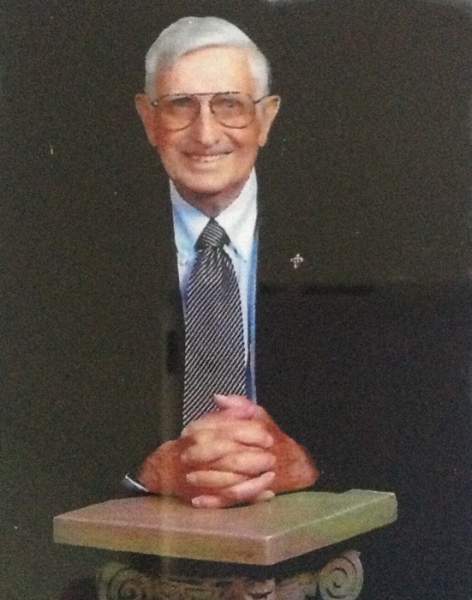 Julian born and raised in St. Pauls, NC.  He earned the high honor of Eagle Scout and was a member of The Order of The Arrow.  Julian graduated high school in 1942 and worked for the newspaper and at Burlington Mills.  In February 1943 Julian joined the US Navy and served 33 months. March 1944 Julian was transferred to the U.S.S. Cavalia and transferred to the US Navy Base at Southport, NC.  While home on Christmas leave he met Jerry at a USO dance.  The two were married June 2, 1945 and June 30th Julian received orders to go to the US Naval base in Hawaii.  After his return home to St Pauls, he and Jerry started their family of four daughters.  He joined the CS Railroad as General Clerk.  In 1952 he joined Cape Fear Railways at Ft Bragg, NC and moved his family to Fayetteville in 1957 serving as General Auditor through the years he served as General Manager and Executive Vice President until his retirement.

Julian and family joined Snyder Memorial Baptist Church in 1957 where he was an ordained deacon, served as the Chairman of the Board of Deacons, Chairman of the Finance Committee, and the Missions Committee.  He taught many classes through the years and also taught Sunday School at the downtown fire station for more than ten years.

Julian supported missions his entire life and traveled with the North Carolina Baptist Men to South America in 1968 and to Accra Ghana 1985-1986 for 12 months.

A Celebration of Life Service in memory of Julian will be held Saturday May 4, 2019 at Snyder Memorial Baptist Church at 3:00pm in the Sanctuary with Rev Wayne Ham, Rev Bob Haynes, and Rev Julia Ann Odom.  Visitation will be held following the service.

A celebration of Life Service in memory of Julian will be held at the Sunset Harbor Baptist Church at the convenience of the family.

Arrangements have been entrusted to Sullivan's Highland Funeral Service & Crematory.

To order memorial trees or send flowers to the family in memory of Julian Carr Odom, please visit our flower store.