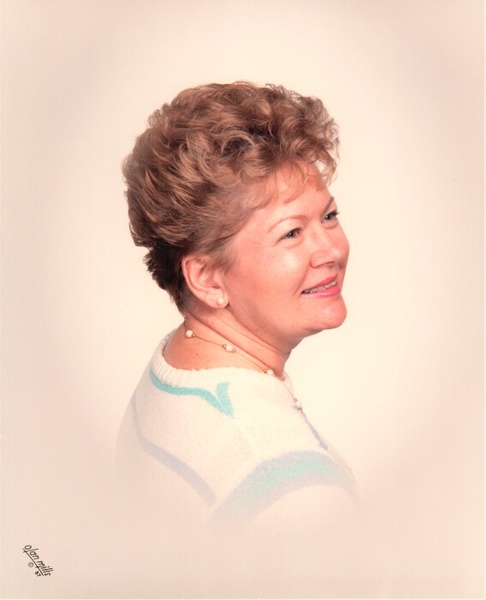 In lieu of flowers, the family asks that memorial donations be sent to SECU Family House at UNC Hospitals, 123 Old Mason Farm Rd, Chapel Hill, NC 27517 or online at www.secufamilyhouse.org/donate-now.

My name is Casi Gilmer and I was Mrs. Frances’ nurse practitioner for the past several months, while she was at Highsmith Rainey Specialty Hospital.  It has been an honor for me to care for her and her family during this time.  It is always extra special when a family asks me to speak at their loved ones’ funeral.  So thank you to the family for this opportunity.

I asked Mr. V to share a little with me about his relationship with Mrs. Frances and I want to start by sharing his sweet memories with all of you.

I met Frances in September 1962, when I went to apply for a job at Fayetteville Public Works Commission as a Civil Engineer.  She was the secretary of that department.  When I entered the office, I saw this beautiful lady.  I was so attracted to her that I even remember what she was wearing.  A flowered blue skirt with a blouse that matched the color of the flowers on her skirt.  I told her that I was there for an interview and she escorted me to the office.  As I followed her, I could not keep my eyes off her.  I even turned around to look at her as she was leaving.  I was called back and hired as a Civil Engineer.  I was SMITTEN by Frances, so I began to inquire about her to make sure that she was not attached to anyone, as I wanted to date her.  A couple of months later, on a Friday afternoon, as we were leaving work, I asked her for a date.  She had the audacity to say NO!!  As time went by, I noticed that she made a point to walk by my office on her way to the printing room.  One day, while I was there, she came in to make some copies.  Being the gentleman I am, I told her to go ahead so that she didn’t have to wait.  It was in the printing room where our romance began.  There, we played the meeting by chance game.  Naturally, it became so obvious that even our coworkers noticed, and they began to tease us.  Finally, one Friday on our way to our cars, I made a point to catch up with her.  She was walking ahead of me and I called out to her.  As she continued to walk, she half turned wanting to know what I wanted.  I told her I wanted to ask her for a date.  She had me follow her to her house where I met her parents.  The following day, we went to Myrtle Beach for the day.  She insisted on driving her new car because she wanted me to drive it.  That was the beginning of our relationship, which continued until I went in the Air Force in August 1965.  When she came to say goodbye, she gave me her picture.  She told me that if I still wanted her when I came back, she would wait for me.  We were married June 6, 1969.

Frances retired from the Civil Service at Fort Bragg.

She liked to go with me to our home in Italy because for her, it was a continuous honeymoon.  Our friends there liked her very much.

Frances was a fighter.  She fought many health battles during her lifetime.

She loved her father very much and spoke about him often.  She loved music and played the organ for her church during her younger years.  At home, she played the piano.  She loved to bake.  She made delicious pecan pies and pound cakes.  She enjoyed gardening, crocheting, and knitting.  When she was amused, she had this big, loud laugh.  She was a good wife, mother, and grandmother.  She was my beloved wife, my companion, and best friend for 51 years.

I believe Mrs. Frances loved deeply.  She was committed to the well being of her family at all costs.

She was a devoted wife who had a lifetime of memories with her husband.  He brought true joy to her.  Their love for each other was obvious even through the facetime calls during her hospitalization.  Mrs. Frances loved me to call her husband and was always moved to tears by the sound of his voice.

I watched as Mr. V stayed at his wife’s bedside.  I heard him reminisce about memories shared.  I cried as I watched the indescribable love he had for her as his tears fell on her hospital bed.  You may think this is me telling you more about Mr. V than Mrs. Frances.  On the contrary, a woman who receives this kind of love from her husband was no doubt remarkable in every way.  She put his needs above her own.  She sacrificed often so he didn’t have to.  She respected him and made him feel confidant and secure.  She created a house full of affection, laughter, and love.

I felt an instant connection to Tanya.  I met her the day Mrs. Frances arrived at Highsmith.  I marveled at her ability to identify her mother’s needs when her mother wasn’t able to verbalize them.  It was as if they somehow were so connected they had their own private language.  The day after Mrs. Frances was admitted to Highsmith was the day the “no visitor” policy was implemented.  I knew Tanya was a safe place for Mrs. Frances and the separation would be difficult for her.  I began to tell Mrs. Frances I would be her daughter until Tanya could be with her again.  I would try to ask the questions I had heard Tanya ask.  I would reassure her, the way Tanya did.  I would stroke her head and arms like Tanya, but Mrs. Frances definitely knew I was NOT Tanya.  :)

The bond between these two was undeniable.  Yes, I learned Tanya was a devoted and attentive daughter.  But, I also learned what kind of mom and grandmother Mrs. Frances had to be to have this kind of relationship with her daughter.

Mrs. Frances often moaned and cried during her hospitalization.  I know there were certainly times her pain was physical and yet at times even after pain meds, she was not soothed.  When the family made Mrs. Frances comfort care, they were allowed to be with her.  I never heard Mrs. Frances moan again.  I am convinced the moaning and tears were her grieving to be reunited with her family again.  She was so peaceful when her husband and Tanya were with her.  It was nothing short of a miracle to observe.

I believe Mrs. Frances was a strong woman.  I believe she overcame many obstacles and challenges in her life with grace.

I believe Mrs. Frances had a mind of her own and when her mind was made up, there wasn’t anything anyone could say or do to change it.

I believe Mrs. Frances could have been on the debate team or even an attorney, as I am sure she had strong opinions and didn’t mind sharing them.

I believe Mrs. Frances loved life and lived it fully.

If Mrs. Frances could speak to you today, I think this is what she would say.

It is so beautiful here.  I am whole.  I can speak clearly.  I can move freely without pain.  Thank you for loving me enough to let me go.  Pat, you are not alone.  There are so many people who love you and want to take care of you, but you have to LET THEM.  Tanya, thank you for you unwavering commitment to ensure I received the best care.  You were my advocate and my voice.  Thank you for always being there and for loving me so well.

Enjoy every moment you have with family.  Remember the good times we've shared and all the memories we've made.  Love hard.  Laugh often.  This is not goodbye; it is just until we meet again.

To order memorial trees or send flowers to the family in memory of Frances Vendettuoli, please visit our flower store.