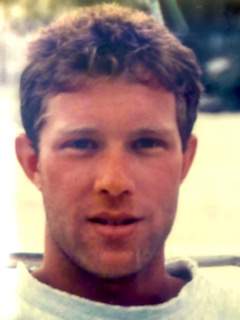 Mr. Douglas Llewellyn Odom (Doug) died on June 6, 2020, at the age of 54 at his home in Charlotte, North Carolina. Born in Rocky Mount, Doug moved with his family to Fayetteville, North Carolina during his elementary years. Growing up in Fayetteville, Doug earned Eagle Scout honors, was a gifted soccer player, and graduated from Fayetteville Academy in 1984.

Doug matriculated to Davidson College where he played one year of varsity soccer, was a member of Sigma Alpha Epsilon fraternity and earned a B.A. in political science in 1988.  Doug loved his time at Davidson and was a faithful supporter of the College and Wildcats, including a trip to Detroit for Davidson’s NCAA Elite 8 tournament run.  Doug considered Davidson home, and friendships formed there remained strong throughout his lifetime.

Doug was an avid and skilled outdoorsman, particularly loving the mountains and the beach. After graduating from Davidson, Doug spent several years in Lander, Wyoming as a mountaineering guide for the National Outdoor Leadership School (NOLS).  His tenure with NOLS led to his love of and unbridled passion for climbing.  Doug's numerous climbing achievements include Denali (the West Face), Mt. Rainier, Mt. Baker and the Grand Tetons. His close circle of climbing friends enjoyed many memorable nights on the trail, and Doug was considered by all who climbed with him to be masterfully skilled.

Doug’s professional career was largely spent as a Manufacturer’s Representative for many of the brands he used in the outdoors - Merrell, Thorlo, Tilley - through Doobrow & Associates, and later as an independent sales representative.  He traveled the country and enjoyed the give and take of trade shows and the interaction with people. Doug never met a stranger. He was a gregarious extrovert who loved a good joke, and he was irrepressibly irreverent in every way. Doug treasured his relationships, and as a result had many that were deep and lasting spanning the course of his lifetime.  While Doug's life was cut short, his infectious smile and good humor will be remembered by all who knew and loved him.

A memorial service will be held on Saturday, June 20, 2020 at 11:00 a.m. at Sullivan's Highland Funeral Service at 610 Ramsey Street, Fayetteville, North Carolina.  The service will take place on the lawn in order to accommodate all who wish to attend, and to ensure compliance with state sanctioned social distancing guidelines.  The family will receive friends immediately following the service, and light refreshments will be served.  A memorial service will be scheduled in Charlotte, NC at a later time, likely in late August.

Doug will be laid to rest alongside his mother at First Presbyterian Church Columbarium in Fayetteville, NC.  In lieu of flowers, contributions can be made in Doug's memory to The Fund for Davidson, P. O. Box 7170, Davidson, NC 28035.

To order memorial trees or send flowers to the family in memory of Douglas Llewellyn Odom, please visit our flower store.