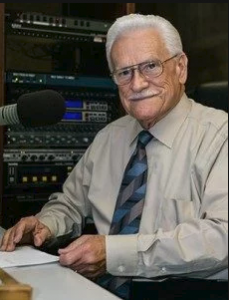 Curtis O. (Curt) Nunnery was born September 25, 1935 in Rock Hill, South Carolina. Curt graduated from Rock Hill High School in 1953 and the same year, he started his career in radio. As a senior in High School and during the summers and holidays while in college, he worked at WRHI AM 1390 in Rock Hill. In 1958 after graduated from the University of South Carolina in 1958 with a degree in Geology, Curt worked part time at WNOK Radio in Columbia, South Carolina and managed WUSC FM, the campus radio station at USC. He also had a classical request show on the campus station.

Serving in the US Army from 1958 to 1960, Curt found himself in Fayetteville, NC, where he began his local career at WFAI AM 1230 on July 4, 1960. This is where Curt’s Coffee Club had its beginning. Curt also started his radio sales career at WFAI and was assistant manager when the station was sold in 1971. Former mayor, Jack Lee, sold WFAI AM to George Beasley in 1971. Curt Continued at WFAI AM as morning show host and sales manager. WFAI AM was the third station in what was to become the Beasley Broadcast Group. Beasley sold WFAI in 1991; Curt’s 31st year with the station. After serving as manager and morning show host at gospel music WFLB AM 1490 in Fayetteville from 1991 to 1994, and general sales manager at WCLN FM in Clinton NC from 1994 to 1997, Curt was asked to come back to WFLB AM, which had been bought by the Beasley Broadcast Group. Curt has served as a morning show host, general sales manager, and operations manager for WFLB/WAZZ since February 1997. That same year, WAZZ FM 96.5 and WFLB AM 1490 swapped call letters. WFLB AM 1490 became WAZZ AM 1490.

In March of 2006, Curt was honored for having done 10,000 radio shows in the Fayetteville Market since July of 1960 – a milestone that few ever reach. Curt Nunnery and his morning show, Curt’s Coffee Club, can still be heard each weekday morning from 6 am to 9 am and The Music of His Life Sunday 8 am to 9 am on Sunny 94.3-FM. Curt had no plans of retiring, he’s having too much FUN! Curt worked for the Beasley Media Group over 42 years.  He was in professional broadcasting for over 60 years.

The family will receive friends from 5 pm to 7 pm on Tuesday, June 4, 2019, at Sullivan’s Highland Funeral Service.  A funeral service honoring Curt’s life will be held at 11am on June 5, 2019, at Arran Lake Baptist Church.  Burial will be private.

In lieu of flowers, the family requests that donations be made to Fayetteville Animal Protection Society “F.A.P.S.”, at 3927 Bragg Blvd, Fayetteville, 28303.

To order memorial trees or send flowers to the family in memory of Curtis "Curt" O. Nunnery, please visit our flower store.
Send a Sympathy Card