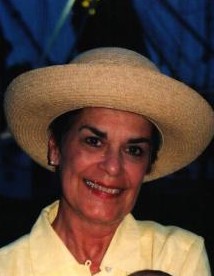 Clarissa Ann Virginia Joyce Odom passed away peacefully at home surrounded by her family on October 8, 2017.  Born January, 2, 1941, in Martinsville, VA, Clarissa was the oldest child & only daughter of Clarence Russell Joyce & Adelaide Price Joyce.  Clarissa or, "Chris", as she was fondly referred to by friends & loved ones, grew up largely in North Carolina, although she lived a short period of her childhood in France while her father served as a Lt. Colonel in the United States Army, and as special envoy between General Dwight D. Eisenhower and the newly liberated nation of France after WWII. The time Clarissa spent in France shaped her love and affinity for the arts, more specifically, the art of painting.

Clarissa attended Salem College in Winston-Salem, NC.  During her studies at Salem she met Terry Llewellyn Odom, a student at Davidson College, whom she subsequently wed. Chris and Terry began their lives together living in both Charlotte and Rocky Mount respectively, ultimately settling down in Fayetteville.  They were the proud parents of two sons, Douglas Llewellyn and Alexander Burroughs, both of whom spent their formative years in Fayetteville.

While her passion and focus was her family and raising her boys, she continued to cultivate her love of the arts by teaching Art in the Cumberland County school system in Fayetteville.  Concurrently, Chris focused on pursuing her talent as a portrait artist, and was commissioned by numerous individuals and entities, both in and out of the state of NC to memorialize people and events through painting.  One of her commissioned works, the portrait of Ben Rose of First Presbyterian in Fayetteville, will live on in perpetuity in the halls of the church.

Chris was beloved by friends and family far and wide.  She never met a stranger, and she had the unique ability to make every person she came in contact with feel special. She gave freely of her love to all who knew her, and embraced life fully.  Outside of her sons, her greatest joy in her later years were her three grandchildren, her brother, his wife, and her three nephews.

Chris is preceded in death by her parents and husband.  She is survived by her sons, Doug Odom of Charlotte and Alex Odom of Atlanta; her daughter-in-law Amy Owen Odom, also of Atlanta; Alex and Amy's children, her grandchildren, Trammell Draper, Virginia Durham and Alexander Burroughs, Jr. (Xander) Odom; her brother and sister-in-law Tim and Diane Joyce; their children, her nephews, Matthew, Russell and Andrew; and uncles Jimmy and Frank Price.

The family will receive guests at 10am on Monday, October 16th, at First Presbyterian Church, followed by a memorial service at 11am.

In lieu of flowers, contributions can be made in her honor to Cape Fear Valley Hospice, The Promise Foundation, at 3400 Walsh Pkwy, Fayetteville, NC  28311

To order memorial trees or send flowers to the family in memory of Clarissa "Chris" Odom, please visit our flower store.
Send a Sympathy Card