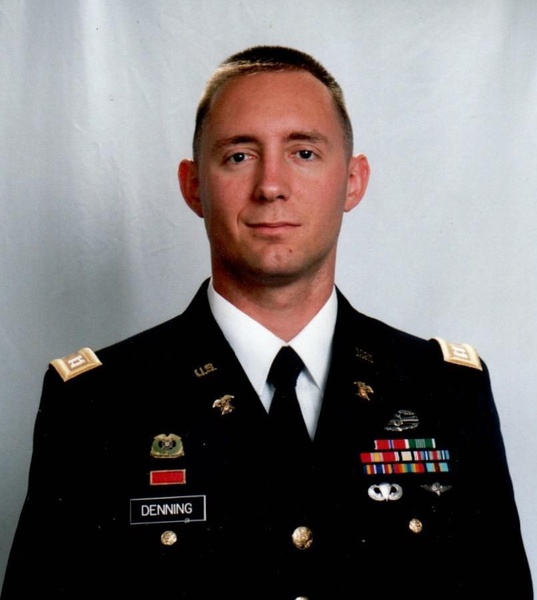 Brian Timothy Denning passed away suddenly early Saturday morning, February 5th, 2022.  He is survived by his loving wife, Sarah Causey Denning, his father and stepmother, Ron and Joan Denning, his mother, Gail Mabry Denning, his brother and wife, Bret and Michelle Denning, his stepsister and her husband, Shannon and Chuck Kesler, as well as Sarah’s parents, Mary and Addison Causey, his sister-in-law and her husband, Kathryn and Anthony Miller, nieces Isabelle and Freya Miller and Grace Kesler, and a nephew, Ryan Kesler.  He was preceded in death by his stepbrother, Thomas Dedge.  Brian was 42 years of age.

Born November 22, 1979, Brian is a native of Fayetteville, NC, and spent much of his childhood in the nearby community of Eastover.  A graduate of Cape Fear High School, Brian was heavily involved in the School’s NJROTC program and served as the Executive Officer.  He joined the United States Army Reserve and attended Basic Training during the summer following his junior year.  Upon high school graduation, Brian continued his enlistment with the Army completing his Advanced Individual Training (AIT).  Having earned a full Army ROTC Scholarship, Brian subsequently attended Campbell University completing his undergraduate degree in Computer Science.  Upon graduation from Campbell, Brian entered active duty as a Logistics Officer in the Army where he served two tours of duty in Iraq attached to the Army’s 3rd Infantry Division and one tour of duty in Afghanistan attached to an Army Special Operations unit.

Brian was a highly trained logistics expert, parachutist, and rigger and his tours of duty in service to this great country were all designated as Imminent Danger assignments.  He was the recipient of several decorations and awards from the United States Department of Defense including two Bronze Stars, a Meritorious Service Medal, two Army Commendation Medals, and various Campaign and Global War on Terrorism Expeditionary and Service Medals.  In the nine years Brian served, he achieved the rank of Major and was designated as Team Chief and Special Forces Battalion Logistics Officer.  In December of 2011, Brian elected to leave military service and was honorably discharged.  He completed his post-graduate education and received an MBA from Webster University.

After spending several years with Target and Palmetto State Armory in various management roles, Brian joined Schneider Electric in February of 2015, a multi-national electrical and power management solutions manufacturer headquartered in Nashville, TN.  Brian loved his work and served Schneider initially as a Master Data Analyst and Agil Scrum Master and was a Certified Scaled Agile Framework (SAFe) Release Train Engineer (RTE).  Highly regarded by Schneider and his colleagues, Brian was proud of his team(s) and his leadership involvement with the recent release of Schneider’s critical new SAP process.

Brian loved Sarah Jeanne deeply, loved life and learning, and was a deeply committed Christian man who loved his Lord and Savior.  He had an extraordinary cheerful outlook about life and work and was an outstanding young executive with a bright future in front of him.  Husband, son, brother, son-in-law, brother-in-law, uncle, and colleague – Brian is and will be sorely missed…

Brian’s family will receive guests Wednesday, February 16th, 2022, beginning at 12:30 pm at Temple Baptist Church in Fayetteville, NC followed by a Celebration of Life service at 1:30 pm.  A private burial service will follow for the family at the cemetery.

The family is served during this time by the Woodbine Funeral Home in Nashville, TN, Sullivans Highland Funeral Services of Fayetteville, NC, and Lafayette Memorial Park of Fayetteville.

In lieu of flowers, the family asks that donations be made to the Special Operations Warrior Foundation (www.specialops.org).

To order memorial trees or send flowers to the family in memory of Brian Timothy Denning, please visit our flower store.