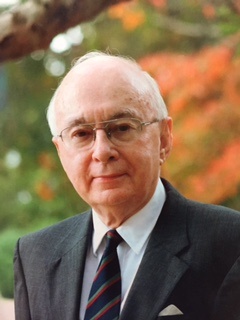 Al attended Valley Forge Military Academy and graduated from Georgetown University School of Foreign Service in 1956.  After graduating from law school at the University of North Carolina at Chapel Hill in 1959, he joined the army as an enlisted man in the infantry, and then received a commission as a first lieutenant in the army JAG corps.  He commenced practicing law in Fayetteville in 1960.  During his 57-year association with the law firm that eventually became McCoy, Wiggins, Cleveland and McLean PLLC, he was active in the areas of banking, mergers and acquisitions, commercial real estate, utilities law, and charitable trusts and estate planning. Al was highly regarded for his professionalism, legal ethics and compassion.  He was consistently nominated by his peers and listed in Best Lawyers of America.

Al was former president of the Cumberland County Bar Association and of the 12th Judicial Bar Association.  He also served on the Board of Directors of United Carolina Bank Corporation, Mid-South Insurance Company, and BB&T Corporation.

Al is survived by his wife of more than 50 years, Jane McNeill Cleveland, and by his daughters Kendrick C. Fentress (Brandon) and Jennifer C. Elam (Paul) both of Raleigh and by his brother Louis Cleveland and family of New York City. He was predeceased by a son, David Ransom Cleveland. The joy of his life was his grandchildren Will and James Fentress and Sam and Rebekah Elam whom he often entertained with stories of his childhood.

Service will be at 11:00 am on Friday, June 30 at Highland Presbyterian Church in Fayetteville, NC. The family will receive friends in the fellowship hall following the service.  A private burial will follow.

To order memorial trees or send flowers to the family in memory of Alfred E. Cleveland, III, please visit our flower store.